Maria-Pia Hope, Vinge’s CEO, received the prestigious award at a ceremony in London on Friday evening.

“The award is among the finest a Swedish law firm can receive, so we are extremely pleased and proud. Unlike other awards of this kind, it evaluates all our services, as the overall assessment is based on many practice areas,” says Maria-Pia Hope.

“The award reflects Vinge's real strength. Because of our size, we have both depth and breadth, enabling us to undertake large, complex assignments and tasks that span multiple jurisdictions. We have the expertise and the ability to build teams around the client. The award is therefore for all of our employees and, indirectly, an expression of our good team spirit.” 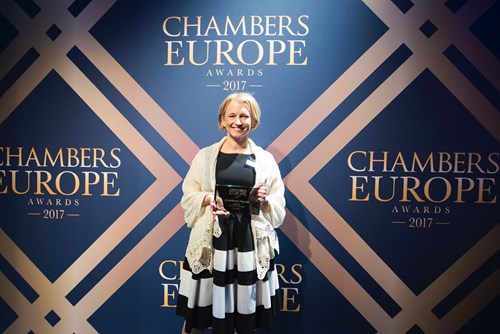 In order to further strenghthen its service offering within the Banking & Finance and Regulatory practice area, Vinge has formed a team within the capital requirements and risk management in the financial services sector. Torbjörn Jacobsson, whose background includes, among other things, head of risk in the banking sector, has been recruited to lead the group as a senior specialist in relation to issues concerning financial risks and capital requirements.